Kiran Infosystems are authorised distributors for DNP screens in India. A DNP screen is an advanced optical lens system, which enables you to control the projected image. It lets you become a master of light.

While conventional front and rear projections screens spread the light in all directions, dnp screens enhance the image for optimum viewing by combining the focusing abilities of a Fresnel lens with the distributive properties of lenticular lenses. The result is up to 4 times higher brightness and extremely uniform images without “hot-spots” and dark corners. 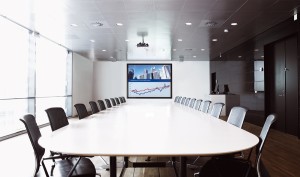 But there is more to a great visual experience than pure power. Contrast is the key to the perfect image – especially when using single lens projectors, which are often very bright but have relatively poor black-levels. For use in brightly lit rooms and outdoor environments, dnp has developed advanced contrast enhancement technologies – such as the Black Bead and Ultra Contrast filters. Technologies which improve the perceived contrast and black levels of your image.

From these technologies dnp has created the world’s most extensive range of screens. Each offering a wide range of options. Depending on your application requirements, you have freedom to choose between special features, such as:

DNP offers the world’s most extensive range of optical front and rear projection screens for all environments:

dnp LaserPanel is based on optical screen technology, and powered by a laser projector mounted over or below the screen. It is an ultra short throw solution, users never need to worry about stepping into the beam while presenting. It is available as an all-in-one solution including laser projector, screen, projector mount, IR remote control and WiFi dongle. All elements of the display can be mounted on the wall. The Touch functionality is enabled by an infrared camera in the projector that reads and interprets the presenter’s touch movements. It comes with an IR pen. A Laser Curtain for finger touch is also available as an accessory. 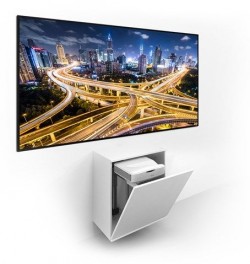 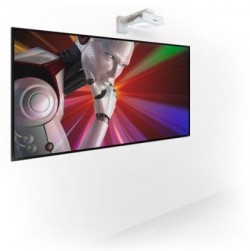 dnp Supernova Blade is an elegant, frameless front projection screen that is ideal for use in meeting rooms, retail stores and residential applications. It is Only 3 mm thick. Easy to mount on wall or hang from the ceiling. Up to 7 times higher contrast than conventional front screens. Compatible with all standard projectors. The screen’s light- absorbing capabilities eliminate the need for a dedicated darkened room and thus extend the opportunities for quality viewing into a much broader range of environments.
[URIS id=557]